First, we are going to drop some facts that might have been missed or overlooked by the community.

Towards the end of 2018, the CEO of Ripple, Brad Garlinghouse, stated that he expects dozens of banks to use XRP by the end of 2019. You can see the video on CNBC Website starting at the 50-second mark.

Then, we have news from a Boss Magazine interview where Yoshitaka Kitao states that he expects the top 20 global banks will be using XRP in 2019.

Let’s do some speculation here on the top 20 banks in the world and try to figure out who is a partner of either Ripple, R3 or SBI. We think it’s safe to say that we will find a partner for each bank.

If we look at the top 4 banks (image below) they are all from China and they have all signed up to use GPI.  We just got news that SWIFT is doing a pilot with R3 Corda Settler.  Corda Settler uses XRP.  XRP has found its way into China via R3 Corda Settler via SWIFT GPI.  We know that Mitsubishi Financial Group is working with Ripple.  We had news last year that JPMorgan sent 8 or so executives to Ripple’s office to discuss……well we don’t know what was discussed as of now, but we are sure it wasn’t a discussion based around how everyone’s families are doing.  HSBC another bank we know is working with Ripple.

You get the point.  If Ripple isn’t working with a bank the chances are that R3 is, and if R3 isn’t then SWIFT is.  The end goal is the same for all 3, an instant settlement on cross-border payments made possible via XRP. 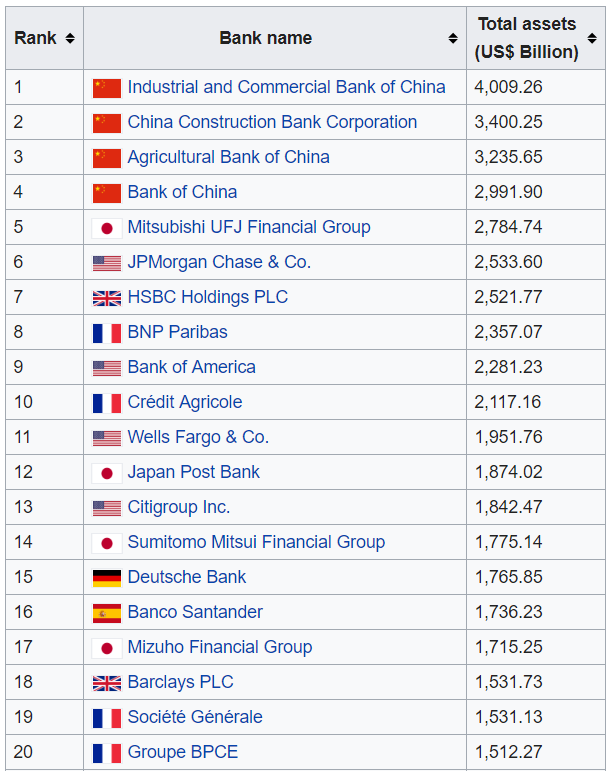