So let’s talk IMF and Ripple for a second. For about a year now maybe two, we have seen the IMF alongside Ripple in images blasted all over the internet. We have seen the managing director and chairwoman of the Internation Monetary Fund praise Ripple and what Ripple is trying to accomplish with the digital asset XRP over and over again. But why? There has to be a purpose.  Is the IMF going to create the “IMF Coin” and are just using XRP as an example? Unlikely. So what is really going on between Ripple and the IMF? Let’s dig in a little deeper.

The Bank of Japan (BoJ) has published a new report that looks into the concept of central bank digital currencies (CBDCs).

The report, titled “Digital Innovation, Data Revolution and Central Bank Digital Currency,” states that CBDCs can be categorized into two types – one, used by general public in place of bank notes, and the other for large-value settlements, which are based on central bank deposits and adopt new technologies such as distributed ledger technology (DLT).

“This paper will focus mainly on CBDC in the former ((a)) category [CBDCs used by general public] and their relevant issues, unless otherwise noted,” the report states.

The launch of the state cryptocurrency was announced on January 29 during the annual conference on electronic banking and payment systems in Tehran. The theme of the conference this year was the “Blockchain revolution”.

The Monetary Authority of Singapore (MAS) will soon test how it could issue digital currency using a blockchain-based interbank payment system.

Here is the icing on the cake: We believe the deal between Ripple and the IMF is done:  Does this remind you of a picture you take with your team when a project has been completed? 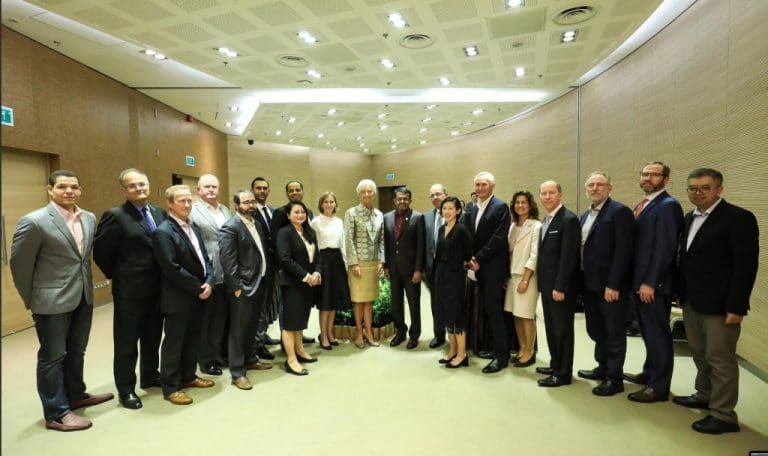