The court document suggests that Ripple lawyers expect the SEC v. Ripple to be over not before August 26, which raises the likelihood of a summary judgment in September.

The discussion over when will the Ripple v. SEC lawsuit end has been dragging for many months now as the blockchain company risks missing out on business opportunities while the case lingers and XRP holders await the relisting of the digital asset.

Ripple appears to be expecting the lawsuit to end between August 26 and November 18, according to information included in a joint stipulation and (proposed) order modifying the case schedule of a pending class action parallel to the SEC v. Ripple lawsuit.

SUMMARY JUDGMENT IN SEPTEMBER OR SETTLEMENT BEFORE?

The letter was filed on February 23 and it states the start date of the class action lawsuit would be August 26, but parties have agreed to start on November 18, 2022.

“Due to the overlap of factual and legal issues between this case and the SEC Action, the Parties agree that there are efficiencies in having certain aspects of the SEC Action precede certain deadlines in this action. Doing so will reduce the burden on the Parties, streamline discovery in this case, and potentially reduce the burden on the Court by narrowing the issues in dispute”, says the document filed by Suzanne E. Nero, attorney at King & Spalding LLP. 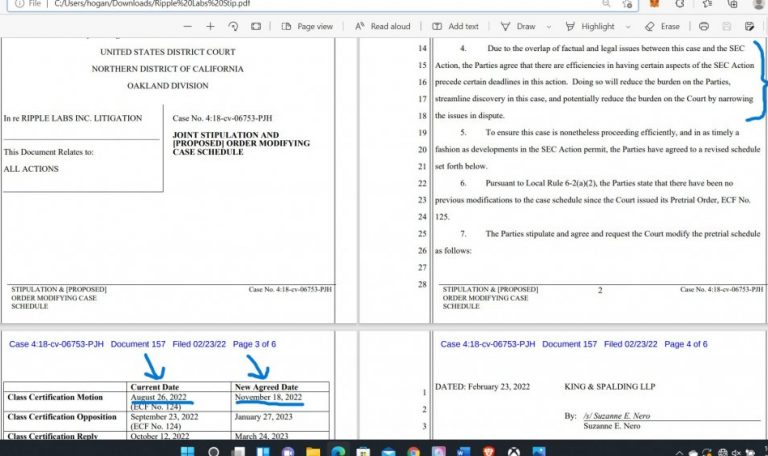 The argument is that SEC v. Ripple is a concurrent litigation that involves many of the same factual and legal questions at issue in the case. There would be “efficiencies” in allowing the XRP lawsuit brought forth by the SEC to “precede this case”.

The court document suggests that Ripple lawyers expect the SEC v. Ripple to be over not before August 26, which raises the likelihood of a summary judgment in September, predicted by attorney Jeremy Hogan, partner at Orlando-based Hogan & Hogan law firm.

“I think Ripple thinks it wins the SEC case in Sept/Oct and then this class action goes away due to “collateral estoppel.””, Hogan commented.

While it is true that Ripple executives have said they will not give in to the SEC, it does not change the fact that a settlement is statistically the most likely outcome for the XRP lawsuit.

Attorney Hogan has recently shared a document indicating a few rules that the SEC and Ripple will follow, including a settlement talk 14 days after the close of fact discovery.

The last settlement discussion, which happened a couple of months ago, wasn’t fruitful. The next most likely settlement time would be at mediation, said Hogan.

Potentially in favor of Ripple is the fact that Judge Sarah Netburn, who has seen all the documents in camera, will be hosting the mediation.

“She knows exactly what is in the emails, etc. and, if I am correct in that the SEC is the problem child here, that could make a big difference. A good mediator can really work miracles sometimes.”

The XRP community-friendly attorney added that his best guess is that settlement may come in April or May. 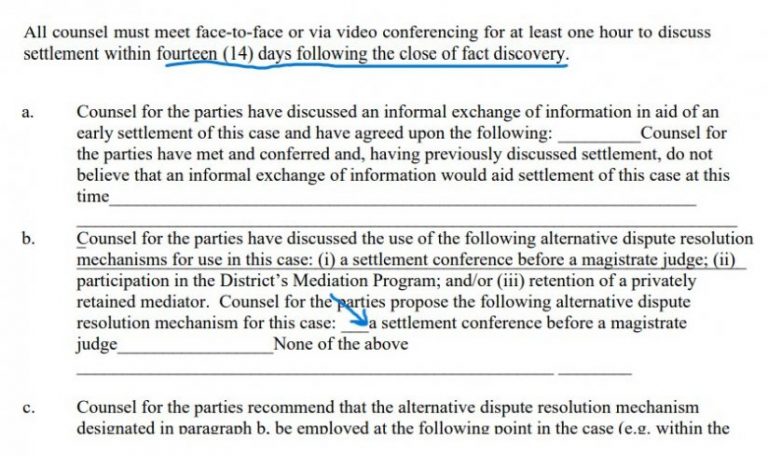