XRP price shows resurgence of a long-held myth amongst crypto enthusiasts. The technicals suggest early evidence of a shift in tides.

XRP price has Twitter in a frenzy after news of Ripple’s CEO Brad Garlinghouse giving a speech for the World Economic Forum resurfaces. Many believe the collaborative efforts between the World Economic Forum and the Ripple blockchain company will validate a long-held crypto theory that the XRP token will eventually replace the United States Dollar. 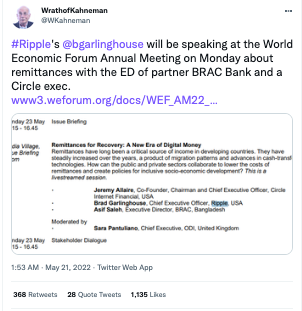 With Tweets and comments increasing by the day, neither party has stepped in to offer any comments on the theory or the meeting that took place at the end of May 2022. Still, traders witnessing the social media uptick are certainly cued in as the technicals also suggest a change of shift.

XRP price currently trades at $0.3647, within a crucial historical trend channel. The erected showcase above the $0.35 median line stands as a contrarian bullish signal. A breach above $0.385 could be the catalyst to send the XRP price towards a macro bearish invalidation point at $0.48 in the short term.

Invalidation of the bullish trend depends on two levels. For riskier traders, $0.35 will suffice. A more conservative approach is the swing low barked at $0.325. If the bears conquer the second invalidation point, the entire uptrend scenario could be void. A plummet towards $0.24 would be on the table, resulting in a 35% decrease from the current XRP price.