The SEC v. Ripple lawsuit has been delayed until 2023. After several key developments in the lawsuit, proponents believe the cross-border payments giant could reach a settlement.

XRP price has suffered a massive blow from litigation proceedings against Ripple. The altcoin continued its downtrend, posting 6% losses overnight.

The case brought by the the Securities & Exchange Commission (SEC) argues that XRP is in fact a security and should be registered as such, but that the Ripple failed to do so since 2013. The SEC has a history of regulating cryptocurrency projects like Ripple, Kik Interactive, and Telegram through the force of “regulation by enforcement.” But the financial watchdog has taken this approach one step further with Ripple. 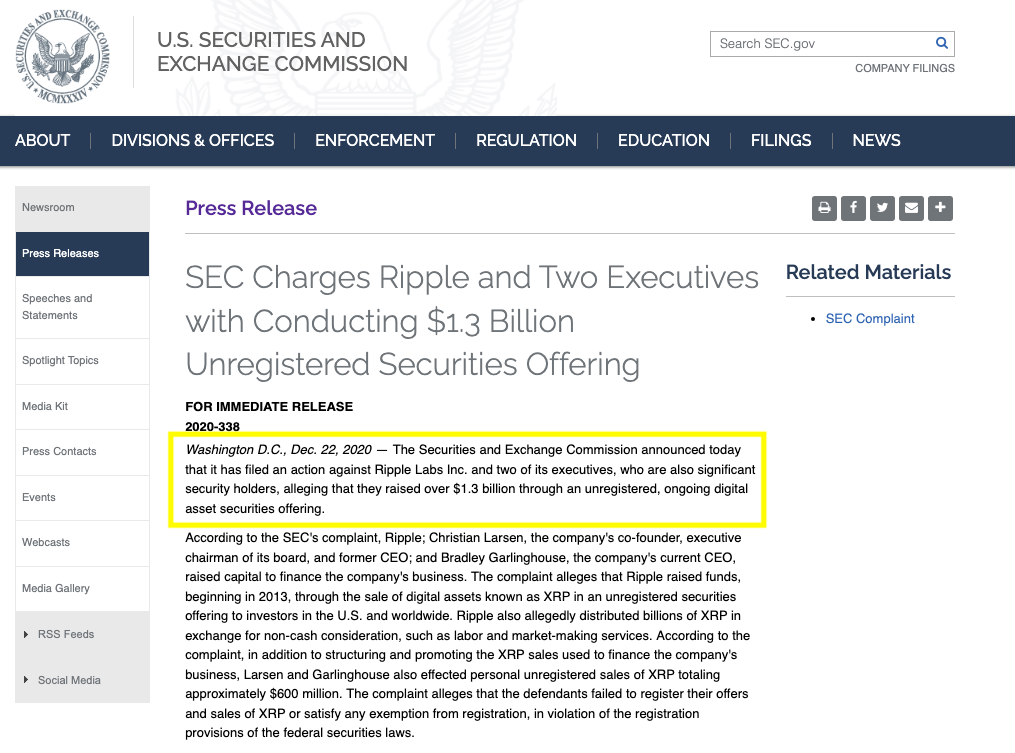 The SEC’s charges against Ripple and two executives.

Exchanges delisting $XRP following the SEC lawsuit is worrisome for many other tokens. The big questions now are “who comes next?” and “how fast will the SEC move?”.

SEC’s lawsuit led to delisting of XRP across the most important cryptocurrency exchanges in the industry , leading to pending class action lawsuit where 63,000 XRP holders presented a united front against the SEC and were willing to provide testimony that directly contradicts not only the SEC’s claims against Ripple but the claims made against Ripple.

Over 63K #XRPHolders have joined in the fight against the SEC and are willing to to provide testimony that directly contradicts not only the SEC’s claims against Ripple but the claims made against Ripple in the pending class action lawsuit.

Experts in the crypto community say the SEC has approached projects like Ripple and Telegram, looking for quick settlements, avoiding long judicial proceedings.

The fair notice defense needs to provide clarity through written law, and point out what is and isn’t prohibited. Since the presiding judge denied the SEC’s motion to strike Ripple’s fair notice defense, this was the first key victory for the payments giant.

This milestone allowed Ripple to bring significant discovery from the SEC into its views on how XRP and digital assets should be classified. Still, it remains to be seen whether the court permits Ripple to present a powerful extension of the fair notice defense.

Prior securities enforcement actions where a similar defense was cited are key to the outcome of Ripple’s case. For instance, in the SEC’s lawsuit against Kik Interactive, the presiding Judge ruled that “investment contract” is sufficiently clear and it is not vague when applied to digital asset transactions. Therefore, Ripple’s fair notice defense could meet a similar fate unless it survives the summary judgment from the Kik case.

Ripple mantains that the SEC has thin reasoning and has provided regulatory confusion based on the speech delivered by then-SEC Director of Corporation Finance, William Hinman. Hinman declared that Ether (the native currency of the Ethereum network) was no longer a security as it became decentralized over time.

The speech was initially interpreted as regulatory guidance. However, the SEC insists it was a personal opinion and “not necessarily” that of the regulatory agency.

Hinman was quoted as saying:

…And putting aside the fundraising that accompanied the creation of Ether, based on my understanding of the present state of Ether, the Ethereum network and its decentralized structure, current offers and sales of Ether are not securities transactions…[]…Over time, there may be other sufficiently decentralized networks and systems where regulating the tokens or coins that function on them as securities may not be required.

Ripple’s team of lawyers has demanded the SEC to reveal a trail of 70 emails that were circulated within the agency regarding Hinman’s speech. Still, the financial watchdog has continued to battle the confidentiality of the emails and issued an expert report on the last day of discovery.

The court condemned the regulator’s action and demanded it pay the defendant’s expenses in filing their motion to strike.

The latest update in the case is a letter from both involved parties agreeing on new scheduling dates. According to James K. Filan, a Ripple proponent and attorney, Ripple and the SEC have agreed to an extension and in a letter to the presiding Judge Sarah Netburn, stating that:

Given the agreement by both parties, Stuart Alderoty, Ripple’s defense attorney,told his 69,800 followers on Twitter to expect a resolution in 2023. Meanwhile,Brad Garlinghouse, CEO of Ripple, told Bloomberg that the SEC’s stance is affecting the blockchain industry in the U.S. as entrepreneurs and developers are fleeing to other countries where regulation is clear.

Garlinghouse explained that in the event that Ripple loses the case brought by the SEC, the payment giant would continue operations smoothly outside of the U.S. where it serves a larger customer base. He reminded viewers that XRP suffered a blow from the SEC’s litigation against the payment company and the slew of delistings and bloodbath that followed. However, the altcoin has survived the aftermath of the litigation being brought against its largest public holder.

FXStreet analysts believe the recent pullback in XRP is the altcoin offering investors an opportunity to accumulate before it targets $1. They predict  that the recent drop in XRP price helped the altcoin collect liquidity, citing its correlation with Bitcoin.