Eleanor Terret, a Fox reporter recently tweeted that two key decisions in the SEC vs. Ripple lawsuit could arrive by the end of the week. Judge Sarah Netburn could rule on the US regulator’s motion to seal its opposition to John Deaton’s request to file an amicus (expert) brief as early as the end of the week.

The Fox reporter highlighted the pending decision on whether William Hinman, Former Director of the Securities and Exchange Commission’s Division of Corporation Finance’s emails and documents fall under attorney-client privilege.

What are we waiting for in the @SECGov vs. @Ripple lawsuit? Two things:

1) Judge Netburn’s decision on whether the Hinman emails and docs fall under attorney-client privilege.

The US regulator has made numerous efforts to conceal emails with contents of Hinman’s speech. Experts argue that the SEC redacted the contents of Exhibit O, that contain expert testimony that John Deaton wants to file under Amicus brief. The SEC has argued that Hinman’s emails and documents are covered by attorney-client privilege after the argument of deliberate process privilege (DPP) was rejected by the court.

Earlier this month, Judge Sarah Netburn conducted a conference call where the 10 documents were perused and this assisted the court in the decision, ahead of a ruling.

Analysts have evaluated the XRP price chart and predicted a continuation of the altcoin’s uptrend. Analysts at Crypto Politan believe the 24-hour RSI indicates that market valuation reveals XRP is in the overnought zone. If XRP price sustains above $0.336, it could revisit resistance at $0.40, in the current uptrend. 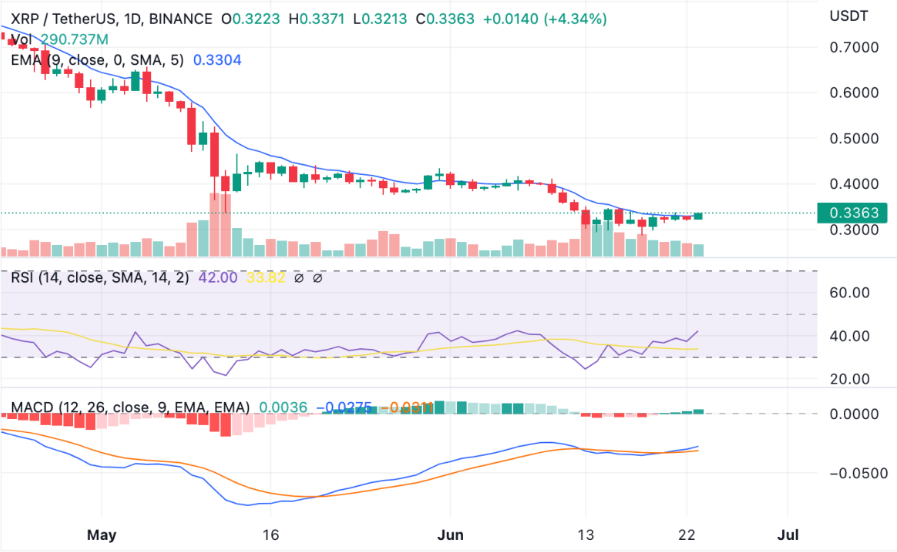